View supersize image
£45.99 Please note this product has selling restrictions to your country. was
Manufacturer :
SJS Cycles part number :
Manufacturer part number :
Details
From the CarraDry range this 100% waterproof pannier bag helps to keep your valuables safe & dry. Made from wipe clean re-inforced PVC with high frequency welded seams to make it water tight, this tough & dependable pannier will take whatever you throw at it. Fixing is with Carradice own C-System with enables easy on/off bike use. All CarraDry bags come with a lifetime guarantee against defective materials & workmanship 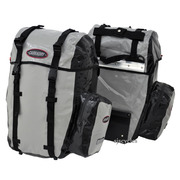 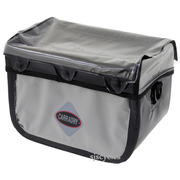 Carradice CarraDry Barbag - Grey/Black - 9 Litre Now from £42.99 Inc VAT
Typical RRP: £57 Quick view
Product Reviews (5)
Overall Product Rating 4 / 5
Good Product At Great Price
By Mikkel
12 Jun 2017
4 / 5
I recommend this product
ConsNone at this price
ProsCheap, waterproof. Easy to assemble
I bought these as a cheaper alternative to Ortliebs panniers. So far they have performed flawlessly.
They are not quite as well made as a pair of Ortliebs, but I suspect they will last a long time.
Great Purchase
By Anonymous
04 Nov 2016
5 / 5
I recommend this product
ConsAssembly of fittings
ProsTough
These panniers are really tough and were just the right size for the bit of extra space I wanted on my front rack. I needed them for a short cycle tour and they didn't a great job. Didn't manage to test their waterproof properties but they seem perfect for rainy weather. You have to assemble the rack fittings after buying but this is quite straightforward. Impressed so far!
By Andy Clark
10 Sep 2016
5 / 5
I recommend this product
ConsNone that I can see yet!
ProsExcellent product, waterproof, durable, great rack fixing.
New to Carradice products but was curios as to how they compare to Ortleib. I am pleased to say that I was very pleasantly surprised by the quality and durability of the products and will definitely be making further Carradice purchases in the future.
In Praise Of Small Panniers
By Nancy Roth
18 Aug 2012
5 / 5
I recommend this product
Conshooks are a little fiddly (may loosen with time)
Proslightweight, look good, waterproof
I very happy with these, they're exactly what I wanted. They're neat, sturdy, absolutely waterproof, and easier to adjust and take on and off than my last panniers were. I wanted small ones: I do shop, but don't carry the week's provisions or building supplies. I commute to a college to work, and often need to bring A4 stuff, some clothes, shoes, sometimes the computer. It's fine. And my heels do NOT knock into them on the backpedal (with bigger ones, it does happen).
I bought these because the old ones, also Carradice, were actually disintegrating. Fair enough, after about 30 years hard use, and in fact a tribute to the durability of the folks' products.

from a happy new pannier owner

p.s. Someone really should rewrite this stupid word processing program, though. Apparently a semicolon or hyphen is too much to ask.
Tidy But Not Big Enough For Shopping!
By Anonymous
05 Dec 2011
1 / 5
ConsQuick attach/release with catches to stop them shaking off
ProsA bit small as a rear pannier
disappointed at having to assemble the attachment system. About as easy as trying to edit these comments, which disappear if you try to insert a capital letter, say.
Questions & Answers (6)
Will these fit on an axiom DLX low rider front rack?
By Shaun Silson
05 Apr 2019
SJS Customer Service:
Not sure we have ever fitted them, but cannot foresee any issues.

The current stock, at time of writing, was received less than a month ago and is the most up to date.

Thanks
Can I use these with the Axiom Journey DLX Low Rider rack?
By Carlo
11 Aug 2017
SJS Customer Service:
yes, perfectly fine
Rack Attachment Clips
By Sam
22 May 2017
Hi there,

Would it be possible to purchase an additional 2 rack attachment clips (one more for each side) for the Carradry panniers? I am going to be traversing some very bad roads while touring and I worry that one clip on each side will holding panniers sufficiently stable.

As well as the main clip there are 2 hooks supplied with each pannier. There are replacement clips available though which are SJSC part number 33623.

Thanks.
Hi There Quick Question? Will These Fit The Blackburn Low Rider Set Up? Many Thanks For Your Reply.
By Daniel
23 Nov 2016
SJS Customer Service:
Hi,

Due to the upper flat plate design used on the Blackburn racks you won't be able to use the centre safety catch but otherwise you can fit these panniers to your Blackburn rack.

These are sold as a pair so the 20L Volume is for both combined. Which would indeed mean 10L each.