View supersize image
£12.99 Please note this product has selling restrictions to your country. was
Manufacturer :
SJS Cycles part number :
Manufacturer part number :
Details
Tread pattern HS348 with wire bead (rigid)
Punctures are a memory. The SmartGuard layer made from a flexible, special rubber offers particular resistance to shards of glass & flints. Even a thumbtack cannot penetrate this protective layer. The SmartGuard belt does not increase rolling resistance. The MARATHON PLUS rolls as easily as a tyre without protection.

It is impossible to guarantee that a flat will never happen, but the Marathon Plus has the best defense against everyday tyre wreckers such as glass, flints or metal shards. Use a pressure gauge to adjust tyre pressures as the common "thumb check" is insufficient due to the special construction of the Marathon Plus.

Please note: These tyres are NOS ( new old stock) and have been in storage for a little while so may have a few cosmetic marks and be slightly mishapen (hence the bargain price!) but they will straighten up once fitted and this will not detract from the performance of the tyre in any way.
Related Products
Product Reviews (11)
Questions & Answers (2) Q & A
Specification
Downloads
Download File
Related products 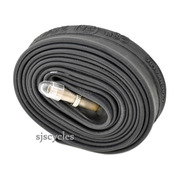 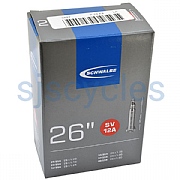 Schwalbe SV12A Presta Tube - 26" Tyres - 25-559 to 40-559 Now from £4.99 Inc VAT
Typical RRP: £7.99 Quick view
Product Reviews (11)
Overall Product Rating 4.2 / 5
Good value
By Anonymous
27 Apr 2021
4 / 5
I recommend this product
Hard work to fit these mis-shaped tyres, but got there in the end, and all is well. Certainly worth the money though.
Good for another few years
By Chris
18 Mar 2021
5 / 5
I recommend this product
ConsNeed good technique to fit
ProsAs puncture proof as anything I know
Should have got two of these the first time I ordered, at such a bargain price. Quick delivery again. Needed a pair of full sized Park Tools tyre levers to fit, but Marathon Pluses have never been the easiest to get on a wheel. As another reviewer has pointed out though, you don't need to do it that often. If I'm right, my previous tyres had been on the bike for 7-8 years.
Excellent tyres
By Anonymous
12 Mar 2021
5 / 5
I recommend this product
Consnone
ProsQuality
Great tyres at a bargain price-usual Schwalbe quality-been using them for 30years-never disappointed!
Rippled inner surface & distorted shape.
By Magnus
29 Jul 2020
1 / 5
ConsOn this occasion, not fit for purpose.
ProsUsually excellent. Unsurpassed in my experience.
I received two tyres both distorted such that when they were fitted, the centre line of the tyre was not consistently in the centre line of the rim.

The inner surface of both tyres was rippled in places, like separated lamination.

Additionally, on one tyre, the end of one bead wire protruded about 3cm outside of the inner surface of the tyre. I didn't notice this when fitting the tyre and it caused a puncture. The tyre is scrap. Both are.

SJS resolved the issues promptly - thank you. How ever did they get through quality control? My previous experience of these tyres is of a quality which is unsurpassed and I'm sorry to leave such a negative review on this occasion.
By Anonymous
23 Jun 2020
5 / 5
I recommend this product
ProsPuncture resistance, durability.
First class tyres at a great price.
Poor, Very disappointed
By Mark Watkins
26 May 2020
1 / 5
Bought these at a discounted price . . . . . . very badly deformed, so much so that I am unable to fit them to the rims, even tried doing so without the inner tube.
SJS Customer Service:
sorry Mark, this hasn't been the experience of many other consumers, the only thing you should need to do is ensure that the bead is bent back to a perfect circle, ie no kinks, before you fit it. RT
Great value tyre
By Alastair
11 Apr 2020
5 / 5
I recommend this product
ConsNone
ProsHalf the price of the equivalent brand new tyres, and just like a brand new tyre
Bought these NOS tyres, half the price of brand new, and they are perfect.

Very slightly mis-shapen when delivered - pretty much exactly as described in the product description - but when fitted to my rims and pumped up to 85psi these straightened out, and the tyres roll straight and true just like brand new ones.

A really great buy at half the price of brand new tyres.
Best commuter tyre hands down
By Ric
30 Aug 2019
5 / 5
I recommend this product
ConsHard to fit - but there is a certain technique.
ProsGreat brand, puncture resistance. Last for thousands of miles.
Already had a pair of these in 700x25c on my MTB for ages and they have been great, but 25c is the thinnest version of this tyre and those are a bit harsh over all the inevitable potholes we have in the UK, so I have swapped to these in a 1.35 inch version on a whole new wheelset. Never had a puncture and expect the same from these new ones. SJS were selling these at a bargain price - half price - so I jumped at the chance since it was the exact size I was looking for anyway. Apparently the 35c (or 1.35 inch) has better rolling resistance than the 25c, which sounds wrong, but isn't. It's one reason I wanted to get off 25c, to these. Will last for multiple thousands of miles.
Outstanding Value - Indestructible And Nice To Ride
By Bruce Devlin
20 Sep 2012
5 / 5
I recommend this product
Consstrong thumbs needed for first (and only) fit
Prospuncture proof, indestructible
These tyres are great. Stick them on a mountain bike with new tubes and then forget about them for half a decade. They roll well, are faster than my Hutchinsons and my previous set lasted for over 10000 miles before there was no tread left.
Schwalbe Marathon Plus Tyres
By BW
18 Feb 2012
5 / 5
I recommend this product
wExcellent speedy delivery, well packed. Have these tyres on another bike, no punctures, many miles over various terrains including the Pyrenees. Very hard to put on first time but worth the effort.
Excellent Puncture Resistance
By Christy
27 Aug 2011
5 / 5
I recommend this product
Constight fit
Prosgood puncture resistance
Selected these tyres to replace previous Schwalbe Marathon tyres that were starting to show their age. Delivered rapidly. They are difficult to put on, but experience indicates that they rarely have to be removed.
Questions & Answers (2)
1990,s marin mountain bike
By christopher dale
17 Jul 2019
hi there , i have an old 1990,s marin mountain bike that i want to make into an expedition bike for a month riding in morocco . please could you tell me if these : Schwalbe Marathon Plus SmartGuard Tyre - 26 x 1.35 Inch (35-559) will for onto the original wheels that are on it ? !
many thanks in advance .
SJS Customer Service:
yes, no problem, don't forget new tubes RT180719
How old is the stock you have on sale
By Anonymous
01 Jul 2019
SJS Customer Service:
We received the current stock on 11/06/19