Customer Reviews (2) 4.5 / 5| Write your review
£35.99
was
View supersize image
£35.99 Please note this product has selling restrictions to your country. was
Manufacturer :
SJS Cycles part number :
Manufacturer part number :
Details
Quality centre stand made from steel. Ideal for steadying your cycle when loading a child seat or just standing it up to lock it. 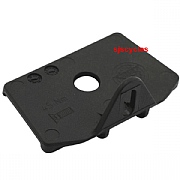 Hebie Retrofit Stand Plate 699 40 £7.99 Inc VAT Quick view
Product Reviews (2)
Overall Product Rating 4.5 / 5
Fits On Kona Ute
By Uli
05 Jan 2014
5 / 5
I recommend this product
ConsI had to ship it all the way from the UK (but so worth it!)
ProsSolid, wider than original bike stand
I have a newer model Kona Ute (the old ones have the kick stand welded to them, or so I have heard), I think mine is a
2011 or 2012 (not sure, bought it used).
I removed the old stand, which has some sort of riser block between the actual stand and the frame. Then I put the Hebie on there, the screw that comes with the Hebie is too short, but the Kona screw fits, so I used that one. Turns out, that one is too long. So I took the whole thing back off, but the riser block thingie between the new kick stand and the frame, screwed the Kona screw back in, and it fits.
It doesn't hit the chain, but the bike stands a little bit higher, than on the old stand. Still, solid bike stand with some spunk behind it, not the flimsy thing that came off stock and the Hebie stand is a good inch wider than the one provided by Kona.
I sued to have a hell of a time just loading little things into the panniers without the bike toppling over, that's a thing of the past.
Rock Solid
By Andrew
21 Aug 2011
4 / 5
I recommend this product
ConsIt's no small beastie.
ProsStable, robust, predictable
This was bought for a Pashley Princess. It replaces a normal Pletscher kickstand... not a bad piece of kit in itself but not great with a heavy bike that has a heavy basket on. The bipod was easy to fit and is much more stable holding the bike upright. It works as you would expect with a short but essential heave to get the bike over the stand's apex so that it can sit back. If the front wheel, bars and basket come off centre it can be a little unstable but something has to force it off and it is easily corrected. I imagine that the Hebie Steering Stabilizer would mitigate that risk but it's more stuff...
Questions & Answers (2)
serves for 700 wheels?
By gabriel Salerno
17 Jul 2018
SJS Customer Service:
This should be suitable for a 700c bicycle, the leg measurement is provided at 29cm so you can see how high it would lift the wheel off the floor.

Can you please tell me the distance between the holes in the plate on this stand so I can figure out if this will fit directly onto my bike?
SJS Customer Service:
This stand has a single bolt in the center of the base plate along with a shaped section to fit a shaped piece on the frame. We would recommend talking to a Cannondale dealer about the most suitable stand to fit your bike.