Over the years, countless Brompton owners have come to appreciate the way the Brompton’s rear wheel folds under, the ease of parking generally far outweighing any inconvenience in carrying the unfolded bike. However, some consumers remain unconvinced by a bike that is not fixed under them as they ride, while others, who regularly carry luggage on the rear rack, would benefit from having their loads secured to the mainframe when lifting the bike over obstacles or up stairs.

The RFC, described as a development in the best Brompton tradition, aims to offer the best of both worlds the rear frame can be fixed or allowed to fold under as the rider chooses; the additional weight of the latching mechanism is almost entyrely offset by the new lighter seat clamp, the whole package being just 1g heavier than a pre-July Brompton.

Please note Brompton have selling restrictions to some countries who have their own dealers. If you are unsure please contact our sales team.
Related Products
Product Reviews (18)
Questions & Answers (5) Q & A
Specification
Downloads
Download File
Related products 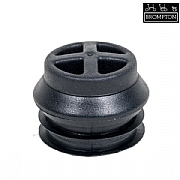 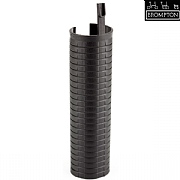 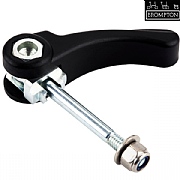 Brompton Seat Clamp Quick Release £17.50 Inc VAT Quick view
Product Reviews (18)
Overall Product Rating 4.6 / 5
Form follows function
By iLovesMyBike
21 Apr 2021
5 / 5
I recommend this product
As I have fitted one of these retro-fit kits to my first Brompton (the T5) I already know that it does the job well and is an accessible way for Brompton owners to upgrade the frame and prevent the rear end of the bike unexpectedly folding!
By Terence Watson
18 Nov 2020
5 / 5
I recommend this product
Top item good service and will be purchasing again with thanks
Great addition. Works perfectly.
By Colin
22 May 2020
4 / 5
I recommend this product
Pleased with this useful adaptation. Fairly easy to fit if you follow the guide carefully. Bit overpriced like most Brompton bits but seems a quality item.
Identifying Parts And Which Way Round.
By Cheryl Prax
04 Jan 2017
5 / 5
I recommend this product
ConsNeed more instructions. Still a little play when lifting bike up - is this normal?
ProsOnce assembled, great
Great product but I should have made a video when installing as it was hilarious! Had trouble identifying washers especially and which way round spring had to go. Also had quick release clamp wrong way round! Also did not realise there was a washer in my suspension block which had to come out to fit new washer. Watched Brompton video but also need a leaflet with more detail re above. Also not clear about where to twist suspension block so that clip locks or does not lock. At first I thought I had fitted it wrong when it did not lock. Just had to turn suspension block until two lines on the buffer disc were at the top. Works perfectly now!
Small Points About The Spring And Shim Washer
By mark2user
20 Aug 2016
5 / 5
I recommend this product
ConsNone
ProsGenuinely useful improvement
Quick release and frame clip: I feel the instructions, whilst correct, would be improved if they made clear that the right-angle bend in the spring has to bear against the notch in the latch.
Suspension block: no shim washer provided but it seems unnecessary so far.
25 Year Old Brompton Upgrade
By Abdulaziz
17 Jul 2016
5 / 5
I recommend this product
ConsNone
ProsMakes handling the bike much more easy
Ordered the frame clip retro kit for my 1991 Brompton together with a new suspension block and all were fitted 2 days ago .
My eternal thanks to Brompton & SJS .
Worthwhile Enhancement For Early Bromptons
By grubbynails
18 Jan 2013
5 / 5
Consfiddly
Proseases the carriage of bike up/over kerbs
A little fiddly to fit and perhaps a little more pricey than it could be but more than worth the effort.
Brompton Retro Fit Clip
By lawman
18 Jan 2013
5 / 5
I recommend this product
Consn/a
Prosn/a
Easy to fit and very convenient for occasional bike lifting.
Brilliant Addition For Older Bromptons
By Juan Carlos Rodriguez
02 Jul 2012
5 / 5
I recommend this product
Conscost
Proseasy to fit
The retro kit is perfect for older Bromptons. I can now carry the bike up the stairs at the station and wheel it to the end of the platform as opposed to folding and carrying.

Very easy to fit, the only snag is, as always with premium products, the price. But dont let this put you off, it will revolutionise your bike.
Muy Buen Accesorio, Imprescindible En Un Brompton
By Anonymous
17 May 2012
4 / 5
I recommend this product
Muy facil de instalar por ti mismo, un buen y practico accesorio que te facilitara la vida a la hora de cargar tu Brompton en diferentes niveles.
Un poco injusto en el precio, pero quien tiene un Brompton quiere lo mejor para su bici...no es asi?
Muchas gracias por su pronto envio, de UK a US en solo una semana.
Does The Trick
By Anonymous
02 May 2012
5 / 5
I recommend this product
ConsA bit overpriced
ProsEasy installation, well made
A well made addition that lets me pop my brompton saddle on my shoulder and carry the bike unfolded up and down the train station steps. As with all Brompton extras though, it's a bit overpriced in my opinion.
Useful Add-On
By Malcolm Jowett
16 Nov 2011
5 / 5
I recommend this product
ConsNo installation instructions supplied - had to google.
ProsWell engineered
Once I'd found & downloaded the excellent installation instructions from Brompton, fitting was a breeze. Very useful to be able to lock the tail end from flopping down, especially when carrying a load on the rear rack.
The kit came with a full set of options for older (like mine) and newer variants.
Worthwhile
By Chris Chinnery
21 Jun 2011
5 / 5
I recommend this product
Consprice
Prosconvenience
Not really necessary but nice to have for lifting a Brompton up and down steps or over fences when on paths. I have now had it for a few weeks of daily use and I never disable it. I can see why it is now part of the standard cycle. Very easy to fit to my early LWB.
Nice And Fast Service
By Thomas lau
22 Mar 2011
3 / 5
I recommend this product
Consno free shipping
Prosfast
but no wonder why no international free ship when up to some amount
Easy Install
By Matthieu Calu
13 Feb 2011
4 / 5
I recommend this product
ConsCan catch on something
ProsEasy install, choice
Very easy to install with the added instructions.
With the clip installed, you still have the choice whether or not to use it.
Excellent From Sjs Cycles And A Good Product To Boot!
By Ted Ronayne
22 Oct 2010
5 / 5
I recommend this product
Constricky, fitting
ProsMake, bike, better
The dialogue with Shelley Bennett made buying from New Zealand simple. The goods arrived in good time and with a bit of tweaking the frame clip fits and works a treat. My brompton is now a different bike and better for the kit. Maybe it is because my frame is not new, but I had to trim suspenson rubber to get the gear aligned correctly. In my view this item should be standard issue on all Brompton's bikes.
Brompton Rear-frame clip
By Anonymous
17 Apr 2008
5 / 5
Best item for every brompton owner.I highly recommended this. You will not be disappointed.
Nice bit of kit, but...
By Mr Ian Tait
11 Sep 2007
3 / 5
Cool bit of kit, let down by self tapping screw to hold the plastic lever on which stripped any grip it might have had instantaneously when tightened up. I substituted a nail, bent over at the end. Take note Brompton! :-)
Questions & Answers (5)
Brompton Rear Frame Clip Complete Retrofit Kit
By Stephen Mellor
26 Oct 2020
I've read that pre-2007 models this item won't fit. Is there any advice you can offer to me on this please?
SJS Customer Service:
No, these fit pre 2007 fine, its the early 1990s models that sometimes are not suitable.

Thanks - 26/10/20
Do you ship to Germany?
By Anonymous
15 May 2019
SJS Customer Service:
Hi, yes we can ship Brompton spare parts to Germany. If you add the parts you need to your basket it will tell you the shipping cost. Thanks 15/05/2019
SJS Cycles part number : 14659
By ken Pisichko
06 Dec 2018
I want to buy this part. No Brompton dealer here in Qatar. Can you ship? Last year you shipped parts to me in Qatar. Please advise.
SJS Customer Service:
Hi there,

Unfortunately due to selling restrictions we cannot send this to you im afraid.

Thanks.
Do You Ship It To Thailand?
By Anonymous
18 Jun 2014
SJS Customer Service:
Hi,

I'm afraid not, Brompton have set their own selling restrictions in which all European dealers cannot send any parts to any countries outside of the EU.